To bring clarity and transparency to what these candidates are saying online, Fama has analyzed the public social media profiles of candidates in 16 of closest races for governor and senator. Our analysis, totaling 32 political candidates, covers over 236 public social media accounts and nearly 153,000 posts spanning a time period of over 10 years. In particular, we sought to answer a few questions around their online behavior:

‣ Which hashtags, mentions, and words do Democratic & Republican candidates use most often?
‣ How many posts do Republican and Democratic candidates have? Governors and senators?
‣ What kinds of positive and altruistic behaviors do candidates exhibit on social media?
‣ How often do these candidates post each month, especially as Election Day gets closer?

Here are the candidates we analyzed, and the behaviors we found: 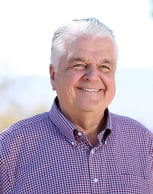 To understand what candidates are saying online, we generated three sets of word clouds illustrating which words and hashtags each party tends to use, and which users get more mentions from either side of the aisle. The size of each term reflects how both popular and specific it is to each party’s Twitter output. 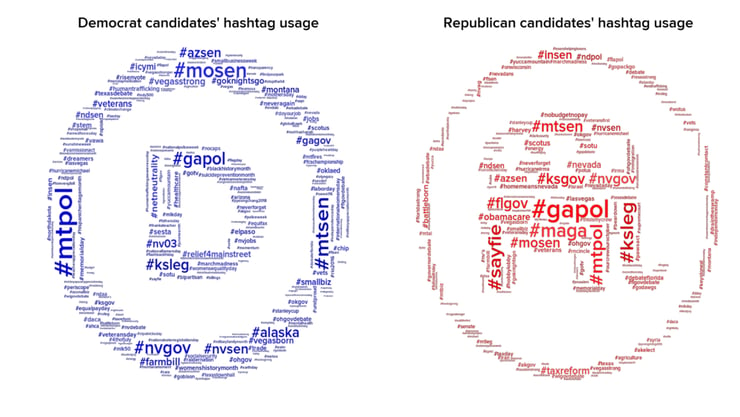 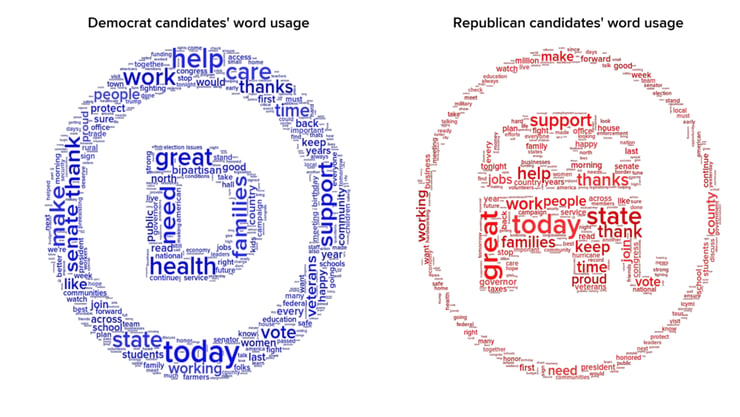 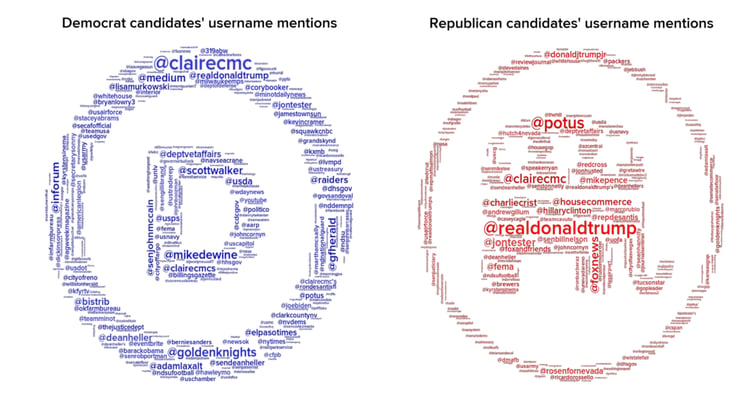 There are notable differences in the terms used and users mentioned. While Democratic candidates use hashtags such as #netneutrality and #relief4mainstreet, Republican candidates used hashtags such as #obamacare and #taxreform more often. As for user mentions, the most active mentions are Claire McCaskill @clairecmc on the Democrat side and Donald Trump @realDonaldTrump on the Republican front.

While the hashtags and mentions used differ across party lines, candidates in both parties are using hashtags to advance the issues they care about. There is also significant overlap in word usage. Candidates frequently use words such as “families” “support” “great” “thanks” and “today”, regardless of the party they represent. Use the previous and next buttons above to view the different word clouds (#hashtags, @mentions, and words).

Posts By Party: Democrats and Republicans

Next, we looked at the number of Twitter posts by party to understand how much Republicans and Democrats are posting, and what types of behaviors they exhibit on social media. How frequently do these politicians demonstrate positive, altruistic behaviors such as volunteering or helping others? 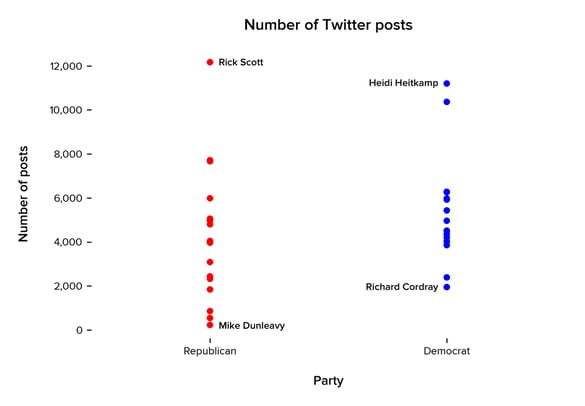 Distribution of the number of Twitter posts by political party. Each dot represents an individual candidate. We have indicated which candidates in each party have the highest and lowest number of posts on Twitter. 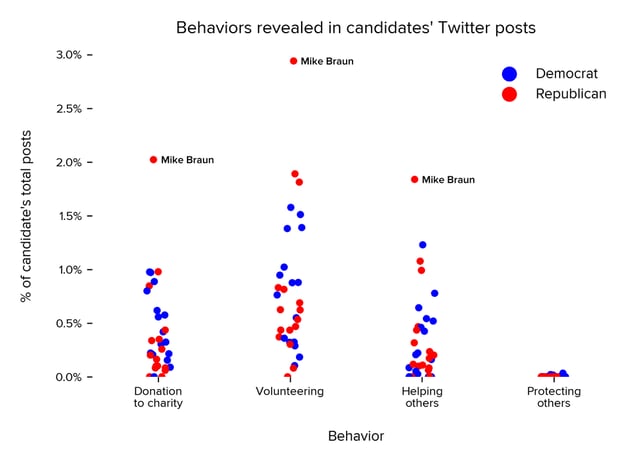 Incidence of specific behaviors as a percentage of each candidate’s total post count, by party affiliation. Keep in mind there are nuances to each type of behavior listed. For behaviors like volunteering, our system includes posts in which a candidate volunteers for a cause, but will not include posts referring to recruitment to serve in the armed forces.

While there are some outliers, we found no significant behavioral differences between the average Democrat and Republican candidate when it comes to their social media. We also found that all candidates in our sample, regardless of political affiliation, have significantly “cleaner” and more curated accounts than the average Twitter user.

Posts By Seat: Governors and Senators

We then analyzed the number of posts and frequency of behaviors by seat. Is there a difference between how governors and senators engage social media? It turns out there is a difference indeed. Senatorial candidates tend to post much more content on social media than their gubernatorial counterparts:

Distribution of the number of Twitter posts based on position candidate is running for. Each dot represents an individual candidate. We have indicated which candidates have the highest and lowest number of posts on Twitter. 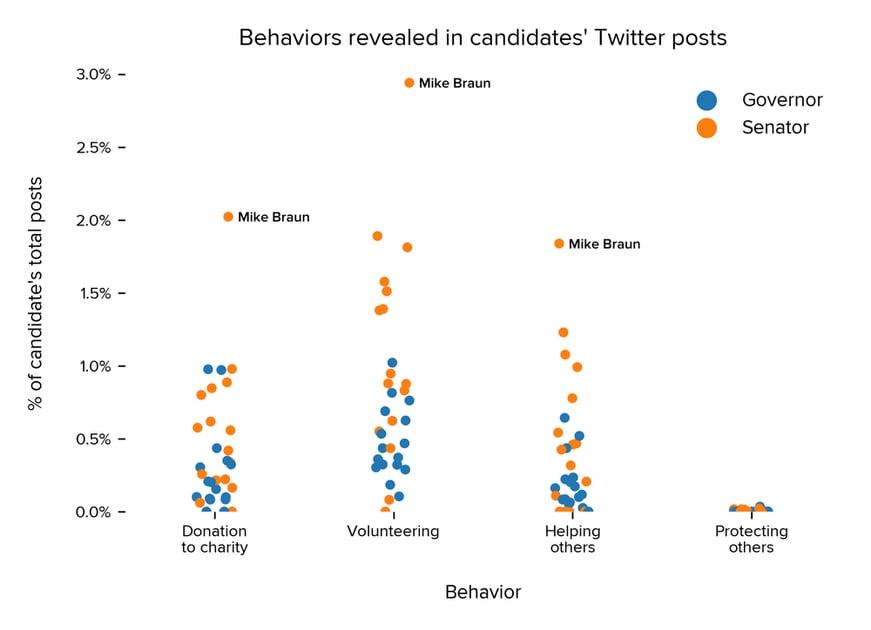 Incidence of specific behaviors as a percentage of each candidate’s total post count, separated by position. Keep in mind there are nuances to each type of behavior. For behaviors like volunteering, our system includes posts in which a candidate volunteers for a cause, but will not include posts referring to recruitment to serve in the armed forces.
Our main finding is that candidates running for Senate tend to be more prolific on Twitter and tend to exhibit positive behaviors more frequently than candidates running for governor. All candidates in our sample have significantly “cleaner” and more curated posts than the average Twitter user analyzed by our system.

Finally, we analyzed the changes in volume of tweets over the last decade, based both on the position the candidates are running for and the political party they represent. Leading up to the midterm elections, across party lines and regardless of position a candidate is running for, the volume of tweets per month has surged: 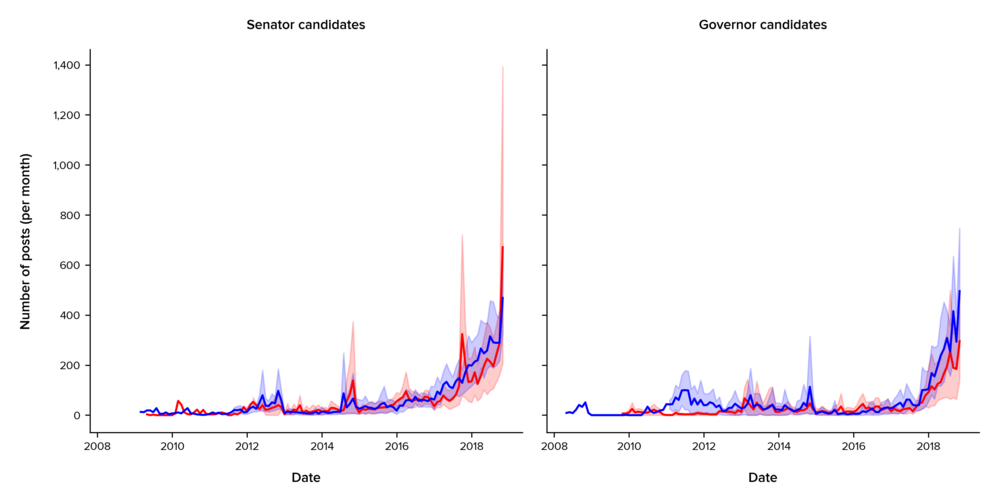 The average number of posts per month over the last decade, by position and by party. The graph on the left measures tweet volume for senatorial candidates; the graph on the right measures tweet volume over time for gubernatorial candidates. Blue and red lines measure the average number of posts across candidates in our sample; blue and red flares show the lower and upper bounds of posts from candidates in each party.

While it can be expected that politicians will post more often on social media as Election Day draws closer, these findings show that social media has become a critical channel that public figures use to represent themselves.

As the world becomes more adept at understanding public personalities by viewing their online content, including their posts on social media, we hope that machine learning and data analysis can help bring greater clarity and transparency. In turn, we hope to help create a healthier, more prosperous, and more equitable society by allowing people to understand and select the people they consider most fit for the job.

Will any of these behaviors correlate to election outcomes? No one knows—but we’ll be watching.

Fama has no political affiliation and was not prompted by any party or interest to produce or publish this post. We share this data from the belief that it is helpful for understanding the role of social media in politics. Therefore, this study is for informational purposes only and is not intended to promote or reinforce any particular candidate, party, or ideology. Questions? Email marketing@fama.io.